The death of John Waterhouse in 1879 left just one male of the Well Head family, his younger brother Samuel. Born in 1815, he was a healthier child than John. Part of his education took place in France. 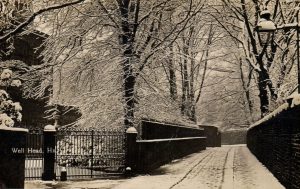 On 25th August 1840, aged 25, Samuel Waterhouse married Charlotte Lydia, sister of Sir Henry Edwards of Pye Nest, although at the time Edwards lived at Hope Hall (now The Albany Club).  Samuel Waterhouse was to follow him as a resident there.

Samuel took his seat on Halifax Town Council as a Conservative in 1851, and the same year was elected Mayor, aged 36.  Besides being a Borough and a West Riding magistrate, he was Treasurer of the Halifax Infirmary for twenty years, on the Board of the Waterhouse Charities, and a Governor of Heath Grammar School.

At the General Election of 1859 Samuel stood as a Conservative candidate for Halifax, but was defeated. The following year, he contested and won a seat at Pontefract, and was to be one of that town’s representatives for seventeen years. He continued to live mainly at Hope Hall, Halifax and was closely involved with the 2nd West Yorkshire Yeomanry Cavalry, holding the rank of Major on his retirement in February, 1873.

By 1877 Samuel was already failing in health, and suffered from paralysis.  On his brother John’s death in 1879, he succeeded to Well Head mansion, but he was only to be its master for a couple of years.  Samuel’s end came on 4th March 1881, at the age of 65, and he was almost as widely mourned as John had been.  He was buried in the family vault, and a stained-glass window in the Parish Church’s Rokeby Chapel was placed in his memory.  His widow survived for twenty years, dying in 1901, aged 80.

Last of the Well Head Branch: Catharine and the Forgotten Scandal

The very last of the Waterhouses at Well Head, was Samuel’s only child, Catharine Grace, born in 1842. In the Halifax Courier for 13th July 1872 appeared the announcement of her marriage, which included this paragraph:

“On Thursday there were many pleasing evidences of rejoicing in the town, on the marriage of Miss Waterhouse in London, to Captain Doherty; Flags floated from the Parish Church Tower, the Conservative Rooms, White Swan, &c., and the Parish Church bells during the day rang merry peals.”

Catharine’s groom was Captain Daniel Henry Doherty, 3rd Hussars (ret’d), born near Dublin in 1839, the younger son of a senior Anglo-Irish judge.  As his bride was the last of the male-line Waterhouses of Well Head, on his marriage, Doherty added her surname after his own, by deed poll.

The more I looked into the life of Catharine Doherty Waterhouse, the more puzzled I became.  This was chiefly due to the apparent disappearance of her husband from local records, though I soon discovered he did not die until 1913.  Records indicated Catharine lived from the 1880s with her mother at Well Head; and, after the latter’s death, on her own, though she also spent time at Scarborough, where she had a house on the Esplanade. or at the said house.  Yet through these years her husband’s address was regularly recorded elsewhere.

Eventually I located information which helped explain this unusual situation.  In 1875, just three years after the marriage of Catharine to the Captain, her husband was in serious financial trouble.  In the London Gazette, all records of bankruptcy are recorded, even today. There in the first issue for November 1875, I found that Captain Doherty Waterhouse had been declared a bankrupt.

What a shock – the heiress of the Waterhouses of Halifax was married to a bankrupt!  There is also evidence that Captain Doherty was a heavy gambler.  And in 1882, he was involved in a legal dispute with the stewards of the prestigious Jockey Club.  Testifying as to his own name in court, he stated: “My name is now Daniel Henry Doherty; it was different for a short period. It was Waterhouse then for some years, from 1872.”  Apparently he never returned to Yorkshire.  Captain Doherty died at Weston, near Bath, in 1913; he was far from bankrupt then, for his estate was worth nearly £70,000 – and nothing was left to his (ex) wife!

Did Catharine’s uncle and father, still alive in 1875, men of impeccable character, persuade the Halifax Press to cover up the scandal of the marital separation of the daughter of one of the borough’s most illustrious families?  Even in Catharine’s obituaries (1916), no mention is made to a marital breakdown; and there is no divorce record.

In her later years, Catharine became a benefactress herself. But she did so very quietly, contributing unobtrusively ‘to many a struggling church.’  She also supported liberally and

more publicly, the foundation of the Mission Church of St Michael and All Angels on Southowram Bank, in 1887; and early in the 20th Century, she donated generously towards the erection of the new church of All Saints’, Elland. 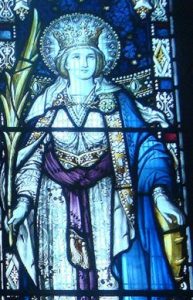 Finally Catharine funded the full refurbishment of the Rokeby Chapel at Halifax Parish Church, to the design of George Fellowes Prynne, architect of All Saints’.  The scheme was completed in May 1915, and involved the installation of a carved reredos and a fine new altar with a beautiful tessellated frontal depicting the Virgin Mary.

Latterly, Catharine lived mostly at her house in Scarborough, No. 6, The Esplanade. After the outbreak of The Great War, she devoted herself to the various Halifax funds for the soldiers abroad, and Red Cross work.  In 1915 she held a large fundraiser at Well Head in aid of the Mayoress’s Fund for Soldiers’ Comforts. On that occasion, the gardens and green­houses were opened to hundreds of visitors, and bands were playing in the grounds.

Unlike her husband, Catharine kept her double surname until her death at Well Head in August 1916.   Her burial was the very last in Halifax Parish Churchyard.  After her death, the house and its contents were sold.

Chair of the Halifax Antiquarian Society