In Copley village stands a fine early 20th Century Pub called ‘The Volunteer Arms’.  This succeeded another ‘Volunteer’ almost on the same site, which was demolished just over 102 years ago.

“The famous old plaster work in the Volunteer Inn, Copley, is being removed and packed for transmission to Kensington Museum, London.  This building is known to history as Copley Hall, and it can be traced back many centuries. It is now about to be pulled down, the licence of the inn having been transferred to a more modern erection close by…

“Two skilled men from Kensington Museum are undertaking the delicate work of removing the plaster, and have moved and packed the large friezes without damage.  One of these ran along the whole of one wall; it is profusely ornamented with various figures, and is in a wonderful state of preservation.”

From this information I ascertained the destination of the plaster was the Victoria and Albert Museum.  Recently, courtesy of Yorkshire Archaeological Society, I came across some photos of this plasterwork as it was in the early 20th Century, which illustrations accompany this article.

Many Halifax residents will be aware that the present ‘Volunteer’ replaced a very much earlier structure, all that remained of a fine house long owned by a branch of the Savile family. In earlier times the manor of Copley had been owned by the Copley family, whose heiress married one of the Saviles of Thornhill in the 15th Century, founding a distinct branch of the family.   How old was the old Copley Hall?  Probably early 15th Century; claims of Norman origin cannot be substantiated. In the late 16th or early 17th Century, the original timber framed structure was encased in stone.

The arms which were latterly visible in the taproom of the old “Volunteer”, were once above a fireplace there.   In both the illustrations here, you can see the Savile arms, three owls on a ‘bend,’ although in the largest representation these are impaled (share the shield with) those of the Wentworth family. 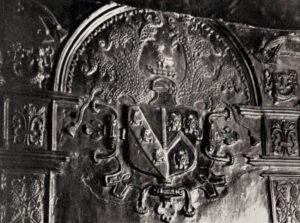 The only intermarriages between the Saviles and Wentworths did not concern the Copley family branch, but that at Bradley Hall, Stainland, which is confusing.  Heraldry can be used as a great detective tool!  However, it is on record that the moulds for such plasterwork were used and reused, even in houses unconnected with families they represent.

It has often been stated that the property today known as ‘The Old Cock Hotel’ in Halifax, erected in the later 16th Century, was the town house of the Savile family of Copley. In the Oak Room at ‘The Old Cock’, the Savile arms appear in plaster above the fine fireplace.   Other surviving Halifax parish yeoman / clothier houses of the early 17th Century – and perhaps earlier – still exhibit similar fine internal plasterwork. And if you are at Bankfield Museum, you can see the wonderful plasterwork from Bin Royd, Norland, which was saved by the Halifax Antiquarian Society when that old house was knocked down just over 100 years ago.  This was finer, and of a later date, but similar in style to that at Copley Hall.

Although there are many wills extant of the Saviles of Copley, the earliest dating from 1459, some specifically requesting burial in the chancel of Halifax Parish Church, no such memorials survive in the Minster today. However, in Watson’s ‘History of Halifax’ (1775) is included an engraved drawing made by a Dr Johnson of Pontefract about 100 years earlier; already this was gone by Watson’s time.  It shows a knight in armour, and is inscribed with the name of ‘Thomas Savile of Copley, Esquyer,’ and Watson dates his death to 1581. 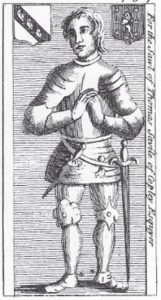 But the arms of the Beaumont family are on the stone too, which indicates the stone is that of a Thomas who married into that family. And there is one – Thomas who was born about 1468 and married Alice Beaumont of Whitley Beaumont about 1491.  Heraldry can be so useful in deciphering old memorials. This Thomas made his will on 5th January 1533/4, and his will was proved in 1535, shortly before our Parish Registers began. His widow’s burial is recorded in the Halifax Registers for 1552.

The last of the male line of Savile of Copley Hall was Sir John Savile, baronet, who died in 1689.  His only daughter and heiress, Elizabeth Maria married Lord Thomas Howard of Worksop Hall, and carried the manor into that family.  Their son, the 8th Duke of Norfolk owned Copley Hall, but had little use for it, being fabulously rich and having many grander homes elsewhere. According to Watson, the Duke “seems to have conceived a sort of prejudice against [Copley Hall], for having arrived at the end of Skircoat Green with a design to pay it a visit, and seeing that it was seated under a hill, and made but a mean appearance, he immediately turned back, and would not give himself the trouble to go to it.”

Early in the 18th Century the manor and Hall were sold to the Dawson family of Huddersfield, and part of the Hall was later demolished. Their relatives, the Kennets of Wakefield inherited the property in the 1750s.  In the early 19th Century, Richard Kennet Dawson – who authorised the building of Copley Bridge, and died in 1850 – sold much of Copley Manor to the Akroyd family. But he did not sell off the Hall, though his family did not live there latterly, and the property was tenanted.   By 1860 it had become a pub; and in 1914 it was still owned by John Richard Kennet Dawson of Sevenoaks, Kent; he was a clerk at the Bank of England, and died in 1934, aged 76.

Before the old building was demolished in 1915, the inn sign read “Volunteer’s Arms – Copley Old Hall,’ with the Savile arms painted in between. Many fine old timbers were saved when the old edifice was destroyed; these were incorporated into the new ‘Volunteer’ and can be seen there today.  Maybe dendrochronology might be used to determine how old they are.

I must get around to contacting the V&A, to find out whether they still have the plasterwork saved from Copley Hall.

Thanks to Stephen Gee for the photo of Copley Old Hall