This month I have chosen to write something about the Walker family of Lightcliffe, as a preliminary to a Talk which I hope to launch at Square Chapel on 11th March.  Here is the tale of the missing Minster (or Parish Church) window.

It may not be commonly realised that the Walker family of Crow Nest had strong connections with Halifax itself.  They did, and in the late 18th Century owned a swathe of land along the Hebble valley towards Shay Syke, much of which was later taken over by the railway. They also held other sections of land near Halifax Parish Church.

And, from 1676 to 1809, many of the family were buried in the Parish Church.  Most of their tombstones have vanished, but the many family interments within the edifice were recognised by Evan Charles Sutherland-Walker of Crow Nest in 1864, when he paid for a new stained-glass window to be placed in the church in commemoration of his maternal ancestors.  Although the attractive brass plaque detailing the donation of this item is still in situ, the window above has apparently disappeared.   Why is this?

In 1958 a decision was made by the Parochial Council to rebuild the famous Commonwealth windows on the south side of the chancel, then in a poor state. A decision was also reached to remove two 19th Century stained-glass windows on the same side, towards the east end of the nave, and replace them with two plain Commonwealth windows on the north side, in order to allow more light into the church.   The stained-glass was removed to the north side, but the plaques remain, and today we have inscriptions below windows to which they are not related.  One of these commemorates the Walker family, and the caption can easily be seen and read today, entirely in Latin.  This highlights the family of Crow Nest as significant in Halifax Parish, mentioning the burial links over 130 years. Also included on the plaque are two attractive representations of the Walker family Arms, not apparent elsewhere in the Minster.  And there is the family axiom; the motto of Ann Walker’s family was Per ardua virtus, usually translated as Courage Through Difficulty.

Can the ‘missing window’ still be seen?  Yes.  As mentioned above, it was moved to the north side of the church in 1958, and is now partly hidden by the side of the organ. The window was ordered by Sutherland Walker in 1864 to the design of London stained-glass artist William Warrington, and features Moses anointing Aaron, as described in Leviticus 8 verse 12.  Other figures support the two main characters, and three Old Testament texts are displayed on a white scroll below.   The quality and style of this window is not regarded as of such high quality as most of the Minster glass.

The first of the Walker family buried was William Walker of Upper Walterclough, Southowram, and of Lower Crow Nest, who died in 1676 aged 84.  The last of the family buried in Halifax’s ancient Parish Church was William Walker of Crow Nest, fourth of the name, who died unmarried in 1809.  He was the uncle of Ann Walker of Anne Lister fame; and on his death, his younger brother John (Ann’s father), inherited Crow Nest.  Until that time, John and family had lived at Cliffe Hill. 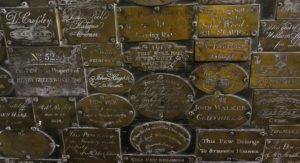 There are other relics of the Walkers in Halifax Minster today.  For example, there are three brass pew ownership plates mounted – with others – on a board under the tower interior.   One of these belonged to William Walker of Crow Nest, and another to his brother John when still at Cliffe Hill.  A third plate bears the name of Ann Walker of Cliffe Hill; perhaps more likely to have been that of Aunt Ann (1757-1847) than of Anne Lister’s partner.  The later Walkers lie buried at Lightcliffe.