Following the departure of the McCrea family from The Shay mansion, the next tenant was Joseph Wood.

Born at Southowram in December 1797, Joseph was the son of Abraham Wood 1770-1852, a successful worsted manufacturer, who was a Piece Hall Committee member in the 1830s.  Joseph worked in his father’s business, to which he eventually succeeded on the latter’s retirement, and renamed.  From the 1830s until the 1860s he lived in Horton Street.  Much of his firm’s business was carried on at Wood’s Mill in Hipperholme.   By 1851 Joseph was employing 70 men, 10 women and 70 children, and by 1861 he was employing a total of 200 persons; he retired in 1872. His move to The Shay took place around 1868 ,and he lived there until his death in August 1884.

Just over a year later, Joseph married again, his bride being Susanna Hammand of Gomersal. The marriage took place at Birstall, and was conducted by Rev. William Margetson Heald junior, who was an acquaintance of Charlotte Bronte.  Joseph and Susannah had one daughter. Susannah was to die in 1882.

Two generations of Woods are buried under an impressive memorial at Lister Lane Cemetery.

The next tenant at The Shay was William Dyer, who had connections with another interesting local building.

William was born at Bacup, Lancashire in 1821, the son of a Baptist minister. He came to Halifax from Manchester as a youth, and by 1841 was living at “The House at The Maypole”, corner of Old Market and Corn Market, and working as a druggist.  By 1847 he had taken over the building and the chemist’s business located there, and he was to remain for many years.  This was the building widely known as “The Oldest House in Halifax”.

William’s first wife was Catherine Young, by whom he had one son; sadly, Catherine died aged 30 in 1846.  In 1849, at Halifax Parish Church, William married again, to Ellen, second daughter of Joseph and Sarah Wood, to whom I have referred above. They were to have eleven children, and by the late 1860s, William had moved the family residence to 9 Balmoral Place, keeping the old building simply for his business. 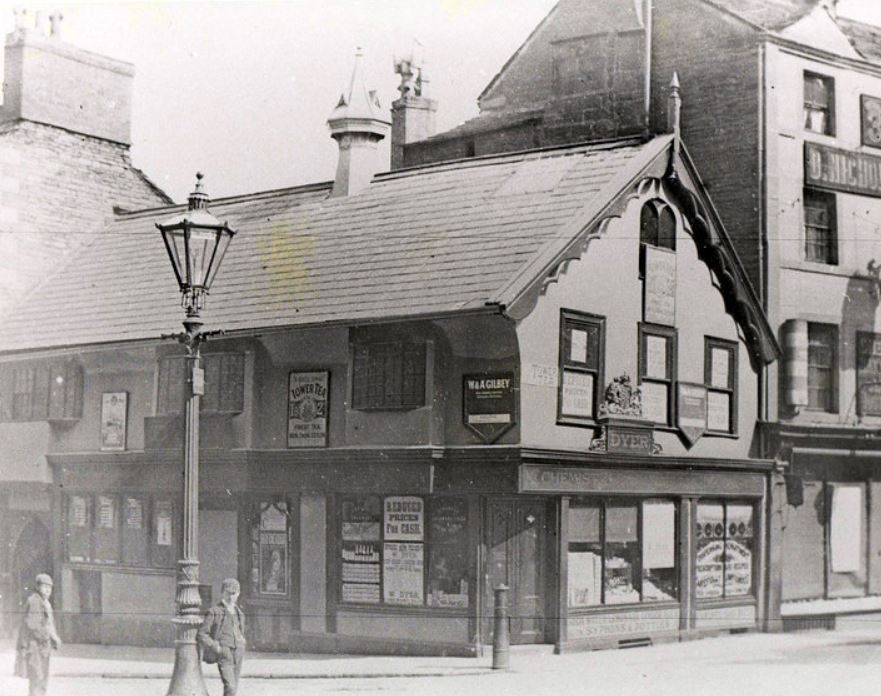 At the time of the 1871 Census he is described as “Chemist to Her Majesty, Druggist, Insurance Agent, Shipping Broker and Wine Merchant,” which sounds rather impressive.  His license to sell spirits included whisky in the 1880s – at 2s. 6d. and 3s. 6d. per bottle!

By 1890 the local council wanted to demolish his business premises; John Lister of Shibden stepped in to ensure the structure was preserved, and re-erected alongside the Whitehall Road.

William Dyer must have taken over the tenancy of The Shay after his father-in-law’s death; he was certainly listed in the Electoral Registers as resident there in 1886.  Around that time he was using some of the ancillary premises, adjacent to Oxford Road, as a production plant for mineral waters and drinks, water being supplied from the Well Head spring.  William retired from business in 1890; he died at The Shay in March 1895. He was buried at Lister Lane Cemetery alongside his first wife.  His widow moved back to a different house in Balmoral Place; she died there in 1904, and was buried with William.   Foer many years their tombstone lay flat on its face, but recently the Cemetery Friends have had it re-erected.

Part four will conclude this series about the history of The Shay Mansion, Halifax.