Thanks to David for continuing the history of The Shay Mansion.  Parts 1, 2 and 3 can be read in the May, June and July 2018 editions or read the un edited articles online at www.skircoatgreendirectory.co.uk.

The next – and final – tenant at The Shay was William Henry Boocook.  He was born at Southowram in 1838. William was the son of James Boocock, card­maker, later of 5 High Street, Halifax.  Educated at Rishworth School as a scholarship boy, later he was virtually ‘adopted’ by a prominent local solicitor, a bachelor, Joshua Fourness Perkinton (1818-81), who lived at Hazelwood, Skircoat, having chambers in Black Swan Pass­age, Silver Street.  In 1865 William was articled to Perkinton for three years; he was admitted as a solicitor in 1870. On Perkinton’s death he took over his practice, renaming it, and moving premises to Imperial Chambers, George Square.

Williams success may be indicated by the fact he was elected President of Halifax Law Society in 1893. He served as Clerk to the Luddenden Foot Local Board and to the District Council from 1878­ to 1897; and for several years was Chairman of the Northern Theatres Com­pany, Ltd. He travelled ex­tensively abroad, in Europe, South Africa and Egypt.

The Boocock family was very musical, and for many years William sang as a bass in Halifax Parish Church choir.  In 1870, at All Souls’ Church, Haley Hill, William married Frances Ann Thompson, daughter of James, a local woolstapler.   They had three sons and a daughter; Frances died in 1885.  In 1890, William married Lilian Emma Elstob in London.

In his early married life, William lived in Gerrard Street, and then in New Bond Street.  By 1891 he was resident at Kensington House, Skircoat Moor.  He rented The Shay for about five years until he retired in 1901.  In that year, he moved to London, where he died in February 1911.   He was buried with his first wife in All Saints’ Churchyard, Dudwell Lane.   His widow died in 1937. 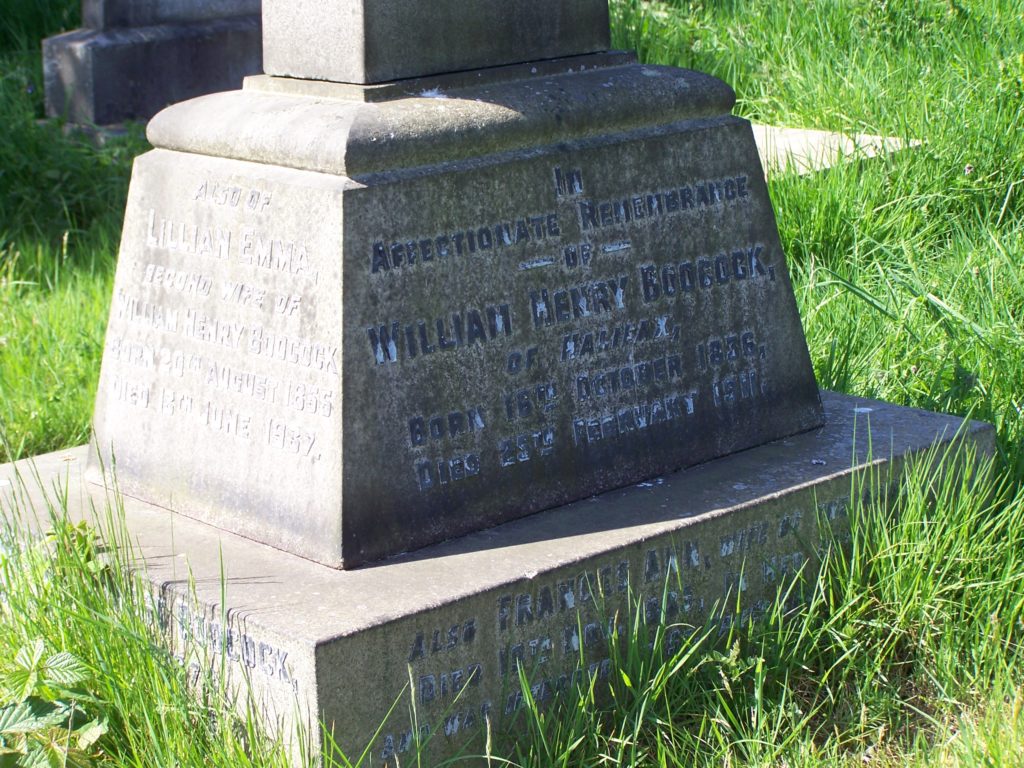 William’s youngest son Herbert took over his father’s practice; and the name W H Boocock is still well known in Halifax.  Within two years of Mr Boocock’s departure, The Shay mansion was bought by Halifax Borough Council, Skircoat Road was cut through its grounds.  The house itself was demolished soon afterwards.

My friend Bob Donald, who lectures about ‘Simpsons of Silver Street’, has explained to me how that company’s cabinet furniture manufactory was established on the site of the former stabling and outhouse premises of The Shay, to the west of Skircoat Road.  Later, these premises were mostly demolished and a petrol station developed there.  Following the closure of that facility, The Hub apartments have been erected on the site.

However, this edifice hides a secret, for a few walls once part of The Shay’s ancillary buildings still survive around the west and north sections of the The Hub’s car parking area.

During August, I will be leading a number of Heritage Walks in Halifax, and is also hoping to help host a Poetry Reading at Lister Lane Cemetery.  Please watch the Press for more details.

Next month, I’ll be sharing information about the Well Head Mansion.