TENANTS OF THE SHAY: RAWSONS AND HAIGHS

Following the death of Mrs Caygill (see last month’s article) The Shay was offered for rent by her daughter, Lady Ibbetson.  The first person to take on the tenancy of The Shay thereafter was Jeremiah Rawson, a member of a well-known local banking family, and younger brother of Christopher Rawson of Hope Hall.  Born in 1787, as a young man Jeremiah travelled in southern Europe, particularly in Greece, bringing back a considerable collection of ancient carvings and statuary.  These items were placed in his brother Christopher’s home, where they were to help inspire young sculptor J B Leyland.

In 1810, Jeremiah married Hannah, one of the many daughters of Thomas Preston of Greenroyde, Skircoat; they lived at The Shay for many years, having a large family.  Jeremiah ran a copperas business at Cinderhills and Exley, but was also involved in business as a stuff dyer and finisher at Old Lane Mill.   It is evident from Anne Lister’s Diaries that she had various disagreements with Jeremiah over stone quarries adjacent to her estate at Shibden.

Lady Ibbetson had taken out an insurance policy of £1,000 on The Shay, which came in very useful in January 1835, when, still under Rawson tenancy, the mansion – like certain other buildings in Halifax – was targeted by a 500-strong mob, all its windows being broken, and some damage caused to the interior.  Compensation of £250 was paid to cover the damages.

In the later 1830s Jeremiah and family moved to Greenroyde, where Jeremiah died in 1839. He was buried in Holy Trinity Churchyard; his daughters later gave a stained-glass window to All Saints’ Church, Dudwell Lane, in his memory.

Miss King, later Mrs Scott. The Shay to her left.

An 1820s portrait of the Rawson family’s governess, Miss King (later Mrs Scott) was included in Ling Roth’s “Yorkshire Coiners” published in 1906.  This depicts The Shay to the left-hand side of the figure. 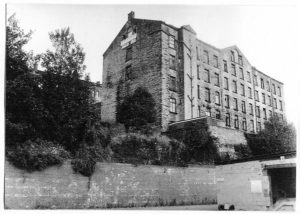 The next tenant at The Shay was William Haigh.  Born at The Mount, Haley Hill, in 1799, William was brother to the Haighs who erected Garden Street Mill, New Bank, and in business with them.  He spent much of his early adult life in Amsterdam, as agent for the family firm. In January 1827 William married the ultimate heiress of Grainsby Hall in north Lincolnshire, Elizabeth Charlotte Borrell;  they were to have a large family, and the sons were educated at public school.  William rented The Shay for over twelve years; he had a high profile in Halifax, and served as a magistrate. He died at The Shay in 1853, and was buried in Holy Trinity Churchyard. 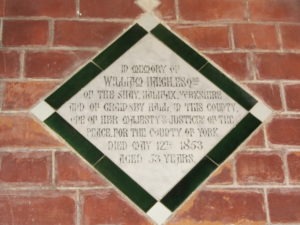 His son, George Henry Haigh, eventually removed to Grainsby Hall, becoming a landed gentleman.  He reconstructed the derelict church of St Martin at Waithe nearby, consisting of just a Saxon tower, making the building into a virtual mausoleum for the Haigh family; I visited the place in 2016, it is fascinating. The Minton-tiled interior walls were once described as resembling a Victorian loo!  George even arranged for his father’s body to be exhumed at Halifax and reinterred at Grainsby.  The inscription on the church wall tiles clearly states he was “William Haigh of The Shay, Halifax.”  Waithe Church was beautifully restored by the Churches Conservation Trust about fifteen years ago.   However, Grainsby Hall has long been demolished, though Haigh family members still live in that area.

George William Brooksbank, for many years butler to the Haigh family at The Shay and at Grainsby Hall, lies buried in Lister Lane Cemetery.

The next tenant at The Shay was Henry Charles McCrea.  Born in Dublin in 1810, he came to Halifax in 1834,  working initially with Holdsworths at Shaw Lodge.  He started out on his own, and  manufacturing damask items and fabrics suitable for the upholstery trade.  In due course his main works were established at the corner of Trinity and Harrison Roads.

In 1841 he married Esther Jane Walsh of Blackwall, Halifax, and they had four sons and two daughters.  Having lived at Elm Cottage (or Grange), Parkinson Lane, the McCreas moved to The Shay in the mid 1850s, and lived there till Henry purchased Warley House in 1867.

In 1860 Henry had been elected to the town council and in 1869 became Mayor of Halifax for two years. During his Mayoralty he inaugurated several important schemes: he opened the new North Bridge and Beacon Hill Road, and turned the first sod of Widdop reservoir.  He stood as a Conservative candidate for Halifax at the 1874 Election, but was defeated.

Henry was part responsible for funding the construction of Albert Promenade, which was a favourite destination of his while out walking.  McCrea also had strong connections with Blackpool where, in 1863, he began a close association with the North Pier Company, which was responsible for building the first promenade pier in the country.  Henry died on 3rd June 1901 aged 91; his tombstone may still be seen behind bushes in the churchyard of old St Paul’s, King Cross.

Much more might be said about this great Halifax industrialist.  Soon afterwards, Henry’s daughter, Mrs. Marke Wood of Liverpool contributed £5,000 to the Royal Halifax Infirmary to cover the cost the ward pavilion which was thereafter known as McCrea Ward. 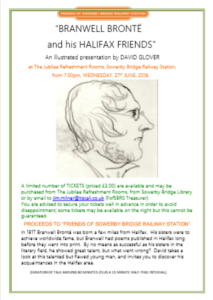 I am also presenting talks and walks at the Halifax Minster during the Summer Festival including a talk about a Halifax girl named Winnie and Prince John on June 29th.  More details https://www.halifaxminster.org.uk/events

Date: 29 June 2018 19:30 – 20:30
Winnie and Prince John – An Historical Talk by David Glover. This is the story of a Halifax girl who kept ‘The Lost Prince’ company at Sandringham 100 years ago. There will be some Royal relics on display during the interval.