On a snowy day this January, I went to visit the grave of a remarkable man at Mount Tabor.  The 20th February 1921 sees the centenary of the death of Whiteley Turner, who, although he lived on the outskirts of Halifax all his life, and rarely had any spare cash, had become well known to the whole West Riding of Yorkshire, and much further afield.  His masterpiece was a book published in 1913 as ‘A Spring-time Saunter round and about Brontë-land’.  Today, copies of this work are still well known, and highly prized.

On 17th April 1865, in rented accommodation at Higgin Chamber, Sowerby, a third son was born to Robert Turner, wool-sorter, and his wife Elizabeth, nee Whiteley.  Given his mother’s maiden name as a forename, his boy­hood was spent at Midgley and Ludden­den.  He had little schooling, and at the age of eight, was sent to work at Peel House Mills, to help towards earning his family’s daily bread.  After four years he transferred to Solomon Priestley’s woollen mill, and there on Tuesday, 12th November, 1878, a tragedy changed his prospects for ever.  That day, the young worker’s right shirt-sleeve got caught in the cogs of a carding engine, the next instant his arm itself was drawn in, resulting in the limb being terribly mutilated up to the shoulder.  He was taken to the old Halifax Infirmary in Blackwall, where the damaged limb was amputated. Having made a remarkable recovery from this trauma – and be­cause of his plight – he was admitted to Luddenden National School as a free scholar. 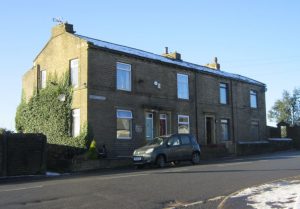 In due course, he took up a job selling weekly Halifax newspapers, and on the advice of his teacher, added the sale of tea to that of papers.  His schoolteacher generously gave the boy the capital to buy his first stock.  Soon, young Whiteley Turner had a wide round, including Luddenden, Booth, Jowler, Mount Tabor and Wainstalls.  In due course, the tea business required his expanding his route considerably, and he would visit Keighley, Queensbury, Stainland, Southowram, and other places far from his home at Hainsworth Row, Mount Tabor, entailing remarkable journeys, all by foot.  Every weekday for forty years – sometimes in pelting rain or blinding snow – Turner trudged on his way.  Indeed, in 1921 someone computed that he must have covered around 20,000 miles on foot in his time!  In 1896, he married Emma Mann of Wainstalls, and they settled down to married life at Prospect Place, 57 Mount Tabor, close to their place of worship at the local Wesleyan Church.

It was in 1885 that Whiteley Turner sent in his first literary composition to the Halifax Courier, and this was followed by many others.  As well as having to plod many miles for his work, he derived great pleasure from roaming at leisure, and had a great eye for detail, be it Nature, people or buildings. And he wanted to share the joy of rambling with others.  Titles of his newspaper articles included ‘A Winter’s Day Outing to Walshaw Dean and Hardcastle Crags’, and thousands of readers were – through his writing – able to enjoy what he delighted in, even if unable to undertake such saunters themselves.  ‘A Spring-time Saunter,’ which originally appeared as a series of articles in the Courier, was intended to awaken among the local public the joys of healthy walking outside industrial Halifax, on the moors and in the dales nearby, with which Turner had become intimately familiar through his excursions.  The work was published in the columns of the “Courier” from 1904-7.  It was the culmination of his efforts, and the vividly-described Pennine characters and wonders of nature helped add to its charm.  The great popularity of his column led Turner to consider that the articles might be put together in book form.

David C Glover – January 2021 – to be continued next month