One of the proudest days in the history of Halifax was when the Halifax Manufacturers’ Hall was opened on 1st January 1779.  Before many years passed, it was renamed The Piece Hall.  Another proud day in the building’s history came with the structure’s handover to the Borough in October 1868; and many will recall the grand reopening of July 1976, when Mayor Mona Mitchell reopened the building following a structural renovation and redevelopment. Then came those delightful little shops we remember so well, many much 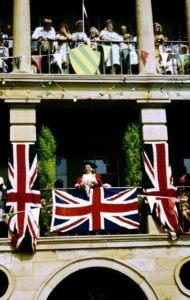 missed.  But now we look to the future: if we are lucky, there will be another reopening of The Piece Hall shortly, on Yorkshire Day, August 1st.

Many will recall that in May 2004, the Queen visited The Piece Hall during her most recent visit to Halifax.  But how many people know that we have an ancestral Royal connection with the building?

Before I explain that story, I must declare that I have had a fondness for the Piece Hall ever since I helped for a while in a bookshop there nearly thirty years ago.   This partiality was increased when I learned the astonishing fact about ten years ago, that my mother’s direct ancestor, William Roberts, a textile man from Burnley area, had rented a room in the building during the 1780s, as had other members of his family.

The design for Halifax’s Piece Hall has often been attributed to a young local man Thomas Bradley, yet no extant contemporary evidence before the late 19th Century named him as architect.  Last year, local historian Stephen Gee uncovered forgotten contemporary evidence concerning the competition to design the Piece Hall, which contest was won by a Halifax builder named John Aked.  So far, there is no certainty either way, it seems.

Other evidence suggests the Piece Hall’s contractors were surnamed Hope – the Hope brothers of Manchester.  By 1773 Samuel (1741-1817) and John Hope (1744-1822) were described in Manchester Directories as Architects and Marble Cutters.  Whoever designed our remarkable local edifice, the plans having been drawn up, in 1775 the Committee for the Piece Hall chose the Hope brothers to prepare estimates for the building work.  In his book ‘The Architecture of the Piece Hall,’ published in 1988, Philip Smithies suggested that one of the Hope brothers was the builder, while the other was the surveyor.

The document went into great detail, and totalled £8,460 18s. 9½d.; which estimate was apparently accepted.  Erection of the building took nearly four years, and the completed structure was formally opened with much fanfare and public ceremony on New Year’s Day, Friday 1st January 1779.

The song sung at the opening ceremony seems to commemorate the involvement of the Hope family in the following lines:

Now our desires are crowned by HOPE

We’ll be no longer seen

Dispersed around in every street,

As heretofore we’ve been;

But to a HALL whose beauty vies

With palaces of old;

Our handiwork shall now be brought

And straight be turned to gold.

Until that time, much cloth had been sold in Halifax’s streets, after the old Cloth Hall of about 1572 (at Hall End) had become impractical to use.  An asterisk against the word Hope, in one version of the above poem, apparently emphasises how closely the brothers were involved in the Piece Hall’s construction.

Samuel and John Hope were the sons of Samuel Hope (senior), bricklayer, of Manchester (1709-81), though their mother was from Yorkshire: Martha Hepworth from Thornhill.   A younger brother of Samuel and John, was William Hope (1751-1827), who married Mary Jones in 1779, and moved to Liverpool.  This couple were direct ancestors of Camilla, Duchess of Cornwall, wife of Prince Charles. Her late father, Major Bruce Shand, M.C.*, even bore the third forename of Hope.  Through the Hope family comes The Piece Hall’s Royal connection.

Other evidence survives of the presence of Samuel and John Hope’s time in Halifax.  They carved and signed the memorial commemorating Mary Sayer in Halifax Parish Church; she died in 1778, and her husband Thomas’s name was added after his death in 1781.  In 1780, the partnership between the Hope brothers was formally dissolved.  After this, Samuel Hope also designed the memorial to John Caygill in Halifax Parish Church (1787), which he signed.  This is quite significant, for it was Caygill who originally gave the land on Talbot Close for the erection of the Piece Hall.

There is another Calderdale Hope connection.  Harriet (1796-1860), youngest daughter of Samuel Hope and Mary Jones, married Thomas Milne (1797-1860) of Warley House, near Halifax.  These relatives of the Duchess of Cornwall lie buried at St Peter’s Church, Sowerby, where you may see their memorial.

It also seems to have escaped local knowledge that Piece Hall builder John Hope (1744-1822), married, as his first wife, Phebe Priestley (1751-82) of Field Head, Birstall, a cousins of one of Yorkshire’s greatest scientists, Joseph Priestley (1733-1804).  He is credited with the discovery of oxygen in 1774.  Priestley was a minister, and visited Halifax on several occasions, preaching at Northgate End Unitarian Chapel. 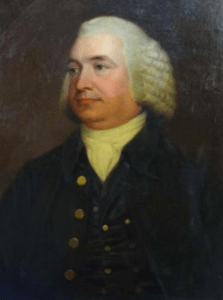 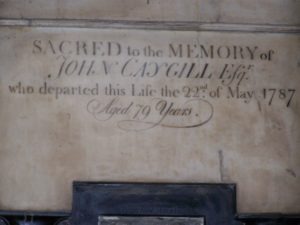