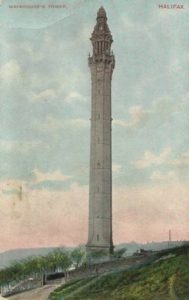 On certain public holidays during the year, The Wainhouse Tower near King Cross is open to the public, who may climb its 400-odd steps, and view a wonderful panorama from its terrace.

In many ways, the history of Wainhouse history is as interesting as the building itself.       Its construction began in 1871, and it was the brainchild of John Edward Wainhouse, a prosperous dyer by trade, who lived nearby at West Air, a house which he had also built, and which is currently known as The Wainhouse Tavern. The tower was originally intended as a chimney for Wainhouse’s Washer Lane Dyeworks, in order that a better draught could be attained, so that smoke did not linger in the valley below.  This was partly because Sir Henry Edwards of Pye Nest, who owned Canal Mills in the valley, had long complained of a smoke nuisance; also, The Smoke Abatement Act had been passed in 1870.  Despite the erection of the chimney, threats of summonses continued to be made by Edwards. For various reasons, the chimney was never used as such, and the sale of Washer Lane Works by Wainhouse in 1873 must have contributed to this.

It had long been the boast of Sir Henry that, when on the lawn at his Pye Nest Mansion, no-one could see into his private grounds.  Wainhouse decided to alter all this, and he ensured the Tower would be so constructed, that members of the public could have a good view of the whole district, Pye Nest grounds included.  The feud between the two gentlemen became legendary. As a result, the building has been called the tallest folly in the world, or The Tower of Spite. For some years its preferred name was The Octagon Tower.

Wainhouse’s first architect was a local man, Isaac Booth of George Street; who is said to have left his post after two years over the feud with Edwards.  He was succeeded by Richard Swarbrick Dugdale, later Borough Engineer for Huddersfield.  The stone used was from an adjoining quarry, and the work was carried out by Wainhouse’s own workmen. The men were paid by day work, and the project took well over three years to complete; the final stone being put in place in September 1875.  It has been estimated that the tower’s final cost was as much as £15,000. The internal flue has a diameter of 7 feet, and this is surrounded by a winding staircase, from the ground up to the balcony.

The full height of the tower is about 253 feet. The internal structure is a brick chimney, surrounded by a stone case over two feet thick; a series of loopholes give light to the circular staircase, which comprises over 400 steps.  From the first balcony sixteen pillars support the upper portion, and the whole crown forms a solid and graceful piece of work. The whole building is of excellent design, and delightful to look at. The view from the top is very extensive, stretching as far as Kebroyd in the Ryburn Valley, Langfield Moor near Todmorden, Castle Hill, Huddersfield, and over beyond Blackstone Edge.

Following Wainhouse’s death in 1883, the Tower was sold in 1887 to Charles Barrett, cloth merchant, and William Henry Dodgson Horsfall, architect, both of Halifax.  In 1893, they proposed to demolish the structure, but this idea fell through, and nothing more was heard of its demolition.  An alternative suggestion that the Tower should be presented to the Borough Council, also came to nothing.  Even in those days it was usual for the tower to be open to the public on Bank Holidays.  In 1894, George Aked Blackburn of Northgate purchased the tower; but did not find a practical use for it, alth
ough during his ownership early in the 20th Century some experiments were carried out from it with an electric searchlight by Walter Emmott, a great engineer, once dubbed the Father of Electricity in Halifax. Successful wireless telegraph experiments were also carried out from the Tower; and W E Denison, of the Halifax Courier, operated his 2KD radio station there in 1909.

In October 1912, owner Blackburn decided to put the tower on the market. The auction took place at The Boar’s Head in Southgate; but there were no takers.      Finally, on 30th May 1919, it was bought by Halifax Corporation for £450, which was raised by a Shilling Subscription Fund.

During World War II, the edifice was used as an ARP observation post.

The local council has tried to keep this wonder of Calderdale in good condition over the years, but in 2007, a structural survey revealed the tower was unsafe, and it was closed. Later that year Calderdale MBC arranged that £350,000 would be spent restoring it, so it could again be opened to the public.

If you have never climbed the Wainhouse Tower, and have a head for heights, and plenty of energy for ascending steps, do take the opportunity to do so soon!