HIGH ON A HILL STOOD A LONELY MANSION…written by David. C Glover 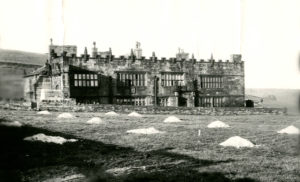 This large house stood high on the Northowram hillside for centuries, and its origins predate those of Shibden Hall by several generations.  It was the home of one family from the late 13th Century down to the period of Commonwealth rule, and its name was High Sunderland.  Sadly, it has now completely disappeared.

The structure which survived until 1950 consisted of a large medieval timber-framed house which was encased in stone in late Elizabethan times, to which an ashlar castellated frontage was added, probably in Jacobean times.

References to a house on this exposed site above Godley, between Claremount and the Shibden Valley, go back to the 1270s, and the family that lived there probably took its name from the settlement.  Over the centuries, the Sunderland family intermarried with other local families, and by Tudor times they also owned the Coley Hall estate.  Descendants still exist in the male line, particularly in North America and New Zealand.  So how did they come to lose their property?

It was all down to backing the wrong side during the English Civil Wars of the 1640s. Unlike most other yeoman families in the Halifax area, Abraham Sunderland supported the King from the outset, and in due course went to help garrison Pontefract Castle.  He died while that fortress was under siege in 1645.   His son Langdale Sunderland, who inherited the family estates, was captain in the service of his uncle Sir Marmaduke Langdale, being seriously injured in the fight at Marston Moor in 1644. Thereafter, he was forced to pay compensation to Parliament, involving a very large sum.  As a result, he had to sell his estates in this area, including High Sunderland and Coley Hall.   He moved to the Featherstone area, and did surprisingly well from coal mining revenues; but his descendants gradually dispersed from there.

In the three centuries which followed, High Sunderland passed through the hands of several other families, including that of William 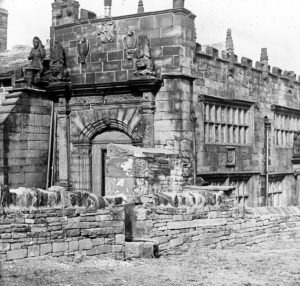 Priestley, founder of Halifax Choral Society. None of these owners lived there, but rented the old house out in various tenements.  Mining subsidence nearby, and maybe sheer age, had brought  High Sunderland close to collapse by the late 1940s, and its owner offered it either to Halifax Corporation, or to The Bronte Society.   Sensing a massive bill to keep the structure standing, both declined, and the structure and materials were sold to a demolition firm from Queensbury.  By 1951, it had completely gone.  A few carvings and ornate stones remain in the care of Shibden Hall, where they may be inspected.

The Bronte link comes through Emily, who spent time teaching at Law Hill, Southowram, in 1838/9, and who may well have known and visited High Sunderland, not far away.  Historians and Bronte experts have noted many similarities in the castellated house’s design and the description of Wuthering Heights in Emily’s famous novel. It may well have helped inspire her.

To learn more about this story of this old house, and Emily Bronte’s time in the Halifax area, do come along to my Talk at Square Chapel on 7th March, details below.

Talks in March by David:

The following, Fundraisers for Square Chapel Arts Centre are all at that venue.  Entry is £6, or £4 for concessions: suggest advisable to book in advance, as bookings by early February were already going strong.

At Heath UR Church, Free School Lane, at 7.30pm on Thursday 15th March:

Manor Heath and Skircoat in Old Photos, plus the story of our local link with Baden Powell (scouts).  A Fundraiser for Scouts.

Entry £5 on the door

Entry by suggested donation at the door