Heritage of Halifax & The North! by Annie Lancaster, Textile Artist 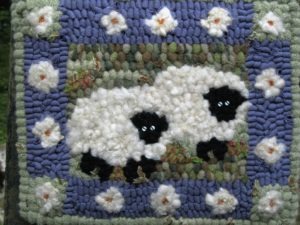 As September is Halifax Heritage Festival month I want to talk about a part of our domestic heritage which has its roots in our textile heritage in the woollen industry – rag rugs.

When I first moved to Calderdale in 1970, aged 10, one of the first places I remember my parents taking me to visit was Shibden Hall. I loved the building, the dark wood panelling and smell of beeswax polish, but the item which really took my breath away was the rag rug in the gypsy caravan, out in the Folk Museum. I was so enthralled by it I even bought a postcard of it which I still have. This was the first rag rug I had ever seen, and from that moment I was ‘hooked’ !

I taught myself the techniques of proddy and hooky rug making, and some years later attended a rag rugging course which happened to be in Shibden Hall itself !

Rag rugs, also known as tab rugs, proddy mats and many other colloquial names were a commonplace item in many Northern homes in the 19th and 20th century. These hardwearing floor coverings were essential on the cold stone flags in the houses. People were encouraged to make rugs as part of the ‘Make Do and Mend’ campaign in the 1940’s. Rug making was very much a ‘thrift craft’, the backing being an old sack, the pile of the rug was made from pieces of old clothes, or wool selvedge from the mill. This was cut into short lengths and pushed through the hessian sack using tools known as prodders or bodgers, sometimes longer lengths were pulled through with a hook.

The new rag rug would be placed with pride in the parlour, sometimes the wrong way up 6 days of the week and the right way up on Sundays ! The rug which had previously been in the parlour might now be moved to the bedroom, and the one from there into the kitchen, eventually being used in the outside toilet or dog kennel, and finally on the compost heap !

Making rugs was a sociable activity with the whole family and often friends and neighbours involved. The children would often sit under the rug frame cutting the pieces of fabric while the adults chatted and worked on the rug.

Rag rugs went out of fashion with the advent of fitted carpets, and tended to be seen as a symbol of poverty. In recent years, however, there has been a resurgence in their popularity. Rag rugging is an excellent way of recycling old clothes and fabrics, and as such is a very ‘green’ activity. There are also many other things which can be created using this technique, from beautiful wall hangings and cushions to brooches, bags and decorative wreaths.

The craft itself is quite addictive, it is very satisfying to make something out of items which would otherwise have been thrown away. Although the traditional fabric was wool, these days T-shirts, sweatshirts, denim and fleece make great rugs, while silks, glitzy and sheer fabrics can be used in wall hangings. I have even used sweet wrappers and carrier bags in some of mine. This really is an environmentally friendly activity ! 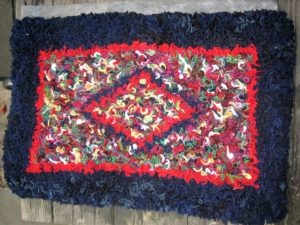 If you or a group of friends would like to learn to make your own rag rugs RaggedyAnnie runs courses from her studio in Croft Myl in Halifax.

Email Annie for details of future courses or to arrange a date for your group to attend.  [email protected]