The Halifax Romance of Jimmy Hanley by David C. Glover

February being the month of St Valentine’s Day, it seems appropriate to feature a romance ♥

Back in the summer of 1948, a heart-warming British film was made, shot mostly in Calderdale. Its title was: ‘A Boy a Girl and a Bike.’ The storyline concerned a local bicycle club from a northern industrial town, and the excursions of its members into the countryside. Inviting new members to join them, they then became involved with illegal bookmakers, a stolen bike, a deserter on the run from the police, and a ‘love triangle.’ The film was made by Gainsborough Studios, and was shot in Hebden Bridge, Halifax, Elland, West Vale and the Yorkshire Dales. Around 50 actors, technicians and staff arrived in Yorkshire for the shooting, and among the stars were such well-known names as Honor Blackman, Diana Dors, Anthony Newley and Jimmy Hanley. And yet the actress chosen to play the film’s juvenile lead was a 16-year-old Halifax bank worker, who was plucked from obscurity and placed in a starring role. 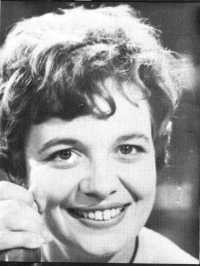 Christobel Margaret Avery was born at Halifax in 1931, the younger daughter of William Bayliss Avery (1901-65), a dental mechanic, by his wife nee Irene Moody (1902-67). Her elder sister was called Helen. Neither parent was native to Halifax, William originating from the Harrogate area, and Irene from West Heslerton, near Malton. William was already living in Halifax in 1924, when the couple were married.  For many years – before and after 1948 – the Averys lived at 34 Savile Drive, where their daughters grew up.

Educated at Crossley and Porter School, as a girl, Maggie (as she was known) Avery had already enjoyed some success acting with the Halifax Thespians.  In 1948 she was chosen from among five aspiring actresses who auditioned for the part of ‘Ginger,’ to play opposite Anthony Newley in ‘A Boy a Girl and a Bike.’ Although she enjoyed cycling, it is interesting to note that Maggie did not own a bike herself.

Shooting of the film took about two months, and a memorable incident was recorded, when Maggie almost caused a disaster. During a jitterbug scene, she was required to take a running jump at her smaller partner, who was then to swing her round. “Margaret took a fine leap but she is a well-built Yorkshire lass – from Halifax – and she sent her partner, young Anthony Newley, crashing to the floor for a 30-minute count,” says a contemporary record. “It just shows where a youthful diet of Yorkshire pudden will get a girl.” No lasting damage was done!

Following the film’s success, Maggie went on to pursue a professional stage career. She also appeared in radio shows and films – including ‘On Monday Next’.

In 1953, she appeared in ‘The Dominant Sex’ at Huddersfield with the Repertory Company, where she met up again with Jimmy Hanley, who was also taking part. (Jimmy was fourteen years older than Maggie, and a few months earlier had divorced Dinah Sheridan, his wife of ten years.)  Jimmy and Maggie fell in love, and in 1955 they were married at Halifax Register Office in Carlton Street. They then took over the licence of a country pub at Effingham, Surrey, and were to have three daughters, Jane, Katy and Sarah.

In the early days of British commercial television, there was an almost-forgotten alternative to the commercial break. This was the Advertising Magazine (or ‘Admag’), a fifteen-minute slot in which performers were allowed to praise the virtues of various products, whilst indulging in rather tame chat. The best known of these Admags was ‘Jim’s Inn,’ and featured Jimmy and Maggie Hanley running a cosy pub in the imaginary village of Wembleham. The setting providing a suitable opportunity for the pub’s clientele to discuss all kinds of products over a pint or two.  Pub regulars were Roma Cresswell, John Sherlock, Jack Edwardes, Diane Watts, Dennis Bowen, Ken Howard and Victor Platt. ‘Jim’s Inn’ ran from 1957 until 1963, but it is believed that unfortunately no recordings survive today.

During the 1950s, Maggie’s parents moved to live at Oxted, Surrey, to be near her.

Jimmy Hanley died as a result of pancreatic cancer in 1970 at Leatherhead, Surrey, at the age of 51.  Maggie went on acting for a few years afterwards, appearing in ‘Owen, M.D.’, ‘Z-Cars’, and ‘Walt Disney’s Wonderful World of Colour.’  In 1975 she retired. She lived latterly in the village of Ripley, Surrey, and died in February 2015, aged 83.