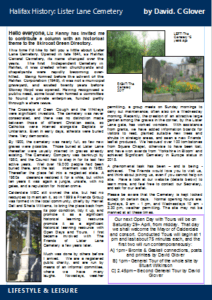 My name is David, and recently Liz Kenny asked if I’d contribute a column with an historical theme to the Skircoat Green Directory.

This time I’d like to tell you a little about Lister Lane Cemetery. Opened in late 1841, as Halifax General Cemetery, its name changed over the years.  The first Independent Cemetery in Halifax, it was created when churchyards and chapelyards were rapidly becoming overfilled.   Being formed before the advent of the Halifax Corporation (1848), it was not a municipal graveyard, and existed twenty years before Stoney Royd was opened. Having recognised a public need, some local men formed a committee to found a private enterprise, funded partly through a share issue.  The Crossleys of Dean Clough and the Whitleys were significant investors. The cemetery was never consecrated, and there was no distinction made between those of different Christian sects, so Catholics were interred alongside Baptists or Unitarians. Even in early days, atheists were buried there. Very democratic.

By 1900, the cemetery was nearly full, so few new graves were possible.  Those buried at Lister Lane thereafter were usually interred in graves already existing. The Cemetery Company was bankrupt by 1950, and the Council had to step in for its last few active years.  Well over 19,000 people had been buried there, and the last interment was in 1963. Thereafter the place fell into a neglected state. A 1980s clearance restored it for a while, but within ten years it was again a jungle, unsafe, with no gates, and a reputation for hidden crime.

Calderdale MBC still owned the site, but had no resources to maintain it, so in 1999 a Friends Group was formed in the local community, chiefly by Harriet Dell and Sheila Williams, to bring the place back from its poor condition, tidy it up, and promote it as a significant historical learning resource with Open Days and Tours.  I first became involved with The Friends of Lister Lane Cemetery a few years later.

Much was done by others before I arrived.   We are a registered public charity, and are run by means of an informal committee, where we have many laughs.  Nowadays, weather permitting, a group meets on Sunday mornings to carry out maintenance; often also on a Wednesday morning. Recently, the creation of an attractive large garden among the graves in the corner, by the Lister Lane gate, has worked wonders.  With assistance from grants, we have added information boards for visitors to read, planted suitable new trees and shrubs in strategic areas, and seen a new Friends’ leaflet produced.  We ‘rescued’ over 100 tombstones from Square Chapel, otherwise to have been lost; and have won awards from ‘Yorkshire in Bloom’ and achieved Significant Cemetery in Europe status in 2015.

A phenomenal task has been – and is being – achieved.  The Friends would love you to visit us, and think about joining us, even if you cannot help on site.  Have a look at our website (details below) to learn more, and feel free to contact our Secretary, and ask for our leaflet.

Please be aware that the Cemetery is kept locked except on certain days.  Normal opening hours are: Sundays, 9 am – 1 pm, and Wednesdays 10 am – 3.30 pm, weather permitting. The site may not be manned at all these times.

Our next Open Day with Tours will be on Saturday 29th April, from midday.  That day we shall welcome the Mayor of Calderdale and consort.  Conducted Tours will begin at 1 pm and last about 75 minutes each, and the first two will run contemporaneously:

B] 1pm – General Tour of the whole site by Stuart Wilkinson