FILMING IN HALIFAX, 1958: ROOM AT THE TOP by David Glover

Recently much filming activity has been ongoing in the centre of Halifax, which caused me to look back at earlier times when the town was used for similar purposes.  One such example was in 1958.

On the 11th June that year, Platform 1 at Halifax railway station was very busy with filming.  All around were film cameras, cables, arc lights, sound equipment, and many technicians. 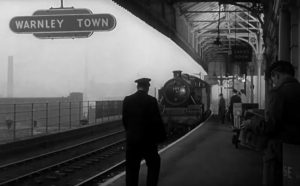 They were working on a shot of actor Laurence Harvey arriving at the station for a scene in the film ‘Room at the Top’, much of which was being produced in the West Riding of Yorkshire. Bradford would predominate; and , as well as Halifax, Keighley featured too. Harvey was playing the character of Joe Lampton, a young man on the make in 1940s industrial Yorkshire, and his conflicting love interests.

The film was based on John Braine’s novel of the same name, launched the previous year.  It was directed by Jack Clayton and produced by John and James Woolf.

One of the earliest tasks on that June 1958 morning, was to take down the ‘Halifax Town’ signs and paste over one of them using a ‘Warnley Town’ sign for the film.  A special train had been provided for this scene by British Railways, in which Harvey arrived, and Mr J N Stainthorpe, public relations assistant for BR at York, was on the spot to supervise arrangements. He told the Courier reporter that morning “We have provided four carriages of the type used in 1946.  We managed to find some with teak exteriors of the type in common use at that time, and have made some slight alterations with numbers. The British Railways crest on the side of the engine, one of those in general use around Halifax, has been covered with black paper.” A reminder of railway nationalisation in 1948.

Four off-duty station staff were among the extras involved in the station scene. Three of them were porters and one was a shunter; they turned up in uniform to play their part.

In the afternoon, the film company transferred attention to the forecourt of the station to shoot the scene where actors Sir Donald Wolfit and Heather Sears were meeting Laurence Harvey. It was Sir Donald’s first visit to Halifax.

During the latter part of that week, the wedding scene for the film was shot at All Souls’ Church, Haley Hill, where Rev Henderson was happy to provide access.  He even allowed the church choir to participate in the occasion.  Viewers may recall that Harvey presented a grim appearance as he descended the steps after the wedding, and was weeping in the car.

The exterior of Halifax Town Hall stood in for Warnley Town Hall. Greystones, on Savile Park – once the home of John and Violet Mackintosh – was used to film exterior scenes of the Brown family’s mansion.  And The Clarence Hotel in Lister Lane was used for shooting some bar scenes; the landlord at the time was Donald Broadbent.

Launched in 1959, ‘Room at the Top’ with its gritty northern scenes proved a great success.  A two-part TV remake was launched in 2012; in my opinion not quite up to the earlier standard.