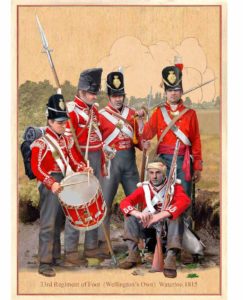 On 17th May a new statue, designed by renowned sculptor Andrew Sinclair and commemorating the Duke of Wellington’s Regiment, will be unveiled at the top of Woolshops. The work will incorporate statues of soldiers from various eras, along with a bust of the great Duke of Wellington.  Work began on the site at the end of March.

As many readers will know, the Duke of Wellington’s Regiment has a very long association with Halifax.  Its title was awarded by Queen Victoria to the 33rd Regiment of Foot in 1853, after the death of the first Duke himself.  This unit amalgamated with the 76th Regiment in 1881, and survived until 2006.

From 1794 the 33rd was under the command of Sir Arthur Wellesley (later the Duke of Wellington) in India, and from 1806-1812 Wellington was Colonel of the Regiment.  Along with other British troops, the 33rd Regiment fought under his command at Waterloo in 1815.

Surviving accounts of the battle written by private soldiers are incredibly rare.  In the late 1970s The Department of Manuscripts at the British Museum (now The British Library) was given a letter with a vivid description of the battle, written two months after it took place, in the name of George Hemingway of Halifax, 33rd Regt.  We are lucky this survived.

Writing from occupied Paris on 16th August, two months after Waterloo, Private Hemingway took up his story at Soignies on 15th June 1815, and related his experiences at both the battels of Quatre Bras and Waterloo.  It appears that, although written in his name, he dictated his text to another Halifax man in the 33rd, Private William Illingworth, whose message to his own family is incorporated in the letter.  You must realise that many soldiers were illiterate in those days. The spelling is very erratic, and there are gaps in the text, so the reader has to concentrate carefully to decipher it.

I shall make a few quotations from the Hemingway letter.   He makes much emphasis on the deprivations endured by the British soldiers in advance of the battles; he tells how soldiers went three days without food, and were much exposed to heavy rain, struggling in the mud.  At Waterloo, Hemingway was wounded about seven in the evening of 18th June, during the last attack by the French Imperial Guard. Ensign Howard of the same battalion was the author of another vivid description of Waterloo, and reports that when the 33rd formed in a square, and faced the final French charge, ‘we could scarcely send our wounded officers to the rear and much less men.’ Hemingway’s wound must have been light, for he was able to leave the field in the hour of victory, a weary survivor. A large proportion of the wounded died – many of them weakened by the limited medical treatment they were given – and some units suffered more deaths over the following months, as a consequence of wounds, than on the day of Waterloo.

The Regimental Muster Books preserve some information about the military careers of George Hemingway and his friend (and scribe) William Illingworth. They joined the 33rd on 1st October 1812 (Illingworth) and 10th December 1813 (Hemingway) respectively. After their letter was written in August 1815, they remained in the French capital for some time. On 23rd December that year they embarked at Calais, and on Christmas Day marched into Canterbury. They reached Colchester on 1st January, then marched to Hull.  Having arrived at Sunderland in April, they received their Waterloo medals. Hemingway (the name is normally spelled ‘Hummingway’ in the Muster Books) suffered a good deal of ill health in the years that followed, but he served in the 33rd until 2nd February 1820. By then he ranked as having served more than seven years (two years’ extra service was credited to every soldier who fought at Waterloo) and was drawing thirteen pence a day. Briefly he served further in Guernsey, but the 33rd was mainly employed on garrison duties in England during these years. William Illingworth stayed on in the regiment. He too drew pay for seven years’ service and (from 1817) for being a bandsman. He was discharged (‘service expired’) on 9th October 1819, some four months before his friend. Neither man rose above the rank of Private.

Hemingway was and is, a not uncommon name in Halifax, and his identification back in Halifax is not certain.  It may well be he was the same George Hemingway who in 1845 kept a shop at 15 Clark Bridge, between Halifax Parish Church and the bottom of Southowram Bank, beside today’s Matalan store. George and Elizabeth Hemingway, to whom the letter was addressed, may have been Waterloo George’s parents.  I have not yet located either his burial, nor that of Illingworth.

To find out where I’m talking this month take a look a the following: 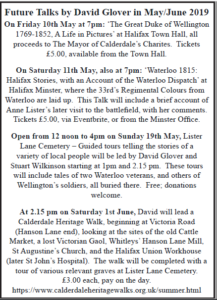 To find out more about the unveiling of the memorial visit https://memorial.dwr.org.uk/#events