Here are a few reminiscences of past Christmas Days, from the diaries of two early 19th Century Halifax ladies. Firstly, I quote from that of Anne Lister, eventually mistress of Shibden Hall, who began her Diary at the age of 15. At the time the first extract below was written, she was aged 27; and the church mentioned was Halifax Parish Church:

“Friday 25 December [1818] – We all walked to morning church. Mr. West, of Southowram, preached. The sermon… did not produce a very favourable impression on one member of the congregation. All staid the sacrament. I fear I never received it with less feeling of reverence. Was thinking more of Miss Browne than anything else. She was there opposite me at the altar table.” I wonder how many people today would consider walking from Shibden Hall to church in Halifax on 25th December? Presumably they also walked back up the hill. You may gather that Anne could be quite a stern critic of church sermons! And the final remark reminds us that she could use churches as a place to meet desirable young ladies. Maria Browne lived at Westfield House off King Cross Lane, opposite People’s Park (though the latter did not then exist). The house was demolished in 1960, and today, St Mary’s Primary School stands on its site. In 1820, Maria married William Kelly of Glasgow, much to Anne Lister’s chagrin! 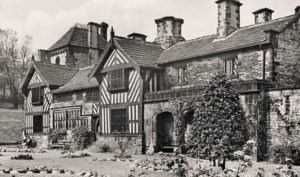 On Christmas Day, 1828, Anne went to Lightcliffe (old) Church: “Thursday, December 25th. – Went to church. Mr. Wilkinson did all the duty. A good sermon … Very good anthem, well sung. We all took the Sacrament; 23 communicants, including the parson and clerk. Miss Walker, of Cliff Hill, took Miss Walker of Crow Nest, and myself in the carriage (she had not been at church since this day year) to Crow Nest.” Rev Robert Wilkinson was also headmaster of Heath Grammar School for decades; there is a memorial to him in Halifax Minster. ‘Miss Walker of Cliff Hill’ was Ann’s aged aunt, the senior Ann Walker, who died in 1847 aged 90; she was also aunt to William Priestley, founder of the Halifax Choral Society. The younger Ann Walker (of Crow Nest) later lived at Shibden Hall with Anne Lister for many years. She was to suffer with what might be termed mental problems. As early as Christmas Day 1833, Anne Lister wrote despairingly of her friend ‘I never saw such a hope¬less person in my life. “How miserable,” said I to myself, “Thank God my own mind’s not like hers.’” 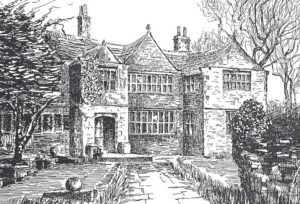 My second series of accounts of early 19th Century Christmas celebrations are found in the Diary of Elizabeth Wadsworth of Holdsworth House. Elizabeth is little known, but kept an interesting Diary, though she only began hers at the age of 57. Born at Holdsworth House in 1759, Elizabeth’s family had owned the estate at Holdsworth for some generations, Yet she was the last of the line, outliving her three brothers; like them, she never married. Elizabeth, who was generous to the poor, founded the Popples Almshouses and School. She also helped fund and make plans for the foundation of St John’s Church, Bradshaw, completed after her death.

“Dec. 25 [1817] – The Christmas Day Singers came into the Garden after three o’clock and played and sang half the Christmas Hymn, very pleasantly ushering in the happy morn. I stayed Sacrament at Illingworth Chapel, and dined about half-past one o’clock with eight old women and Hannah Ayrton – about three o’clock the School Children came and sung the four last verses of the Christ¬mas Hymn and Evening Hymns, and the whole of the 100 Psalm to the Harpsichord, about 80 were served with cake.”

“Dec. 25 [1825] – Christmas Day. At Illingworth Chapel, stayed the sacrament. Mrs. Ramsden and five others came to get dinner with me. We had boiled beef, roast goose, giblet and veal pie, and plum pudding. About 200 of the school children came and sang the Christmas and Evening hymn … they had cake on going out. The old women had each a cap and handkerchief and a little tract … given them at going home.”

The term ‘staid (or stayed) the sacrament’ refers to receiving Holy Communion, then distributed only on limited days during the year. Mrs Ramsden was from The Jumples, Mixenden, member of a family who were staunch supporters of St Mary’s, Illingworth. ‘The Christmas Hymn’ was ‘Christians Awake, Salute the happy morn…’ written about 1745 by John Byrom of Manchester (1692-1763), whose sister Elizabeth married Thomas Brearcliffe, originally from Halifax, owner of Stoney Royd, and of Dam Head, Shibden. The couple went to live at Spring Gardens, Manchester.

Readers will note that in 1817 ‘The Christmas Hymn’ was sung after 3 a.m. in the garden of Holdsworth House! Elizabeth Wadsworth’s father and one brother were buried under the driveway at Halifax Parish Church; a memorial to them may be seen in the Holdsworth Chapel, at the Minster.
Elizabeth Wadsworth herself died at Holdsworth House on 5th April 1837, aged 77. She was not buried at Halifax, but at Calverley, with her mother and two older brothers. She left her estate to a distant relative, Matthew Ayrton, on the condition that he took the surname of Wadsworth.

I am most grateful to Halifax Antiquarian Society, to Calderdale Museums Service, and to Helena Whitbread for some of this information and for illustrations.
May I wish a very Happy Christmas to every reader!
David C Glover – November 2017