28th March 2018 By Liz Kenny in Uncategorised No Comments 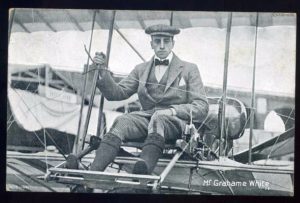 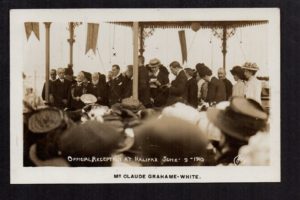 On Whit Saturday 11th June 1910, the first aeroplane flight over the town of Halifax was made by Claude Grahame-White, Britain’s premier aeronaut at the time.  He took off in his Henri Farman biplane from Halifax Racecourse (today the site of West End Gold Club), heading towards Halifax Zoo at Chevinedge, which he circled, before returning to base.  However, a brief flight by the same airman in the same aircraft the previous evening had been the first flight in the Halifax area.

A reporter of the Saturday flight recorded: “At three minutes to three, the aeroplane, looking like a kite, could be dimly discerned… crossing Savile Park, and soaring over the Orphanage.  He was on the left of the Tower… high above the chimneys.”  And there were further planned flights on the following Monday and Tuesday. 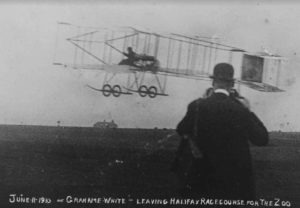 Arriving in Halifax by car on Thursday 9th June, Grahame-White had been greeted by Halifax councillor for Akroydon, Charles Frederic Spencer, a promoter of the Zoo, who had invited him to Halifax at a fee of £1,000. A year earlier, there had been experiments with hot air balloons at the Zoo itself, also organised by Coun. Spencer.

On his arrival in town, Grahame-White was taken to the White Swan Hotel, where he was to stay; though soon he had to leave quickly to reach the Zoo by road, where a civic reception in his honour was hosted by the Mayor, Frederick Whitley-Thomson.  Meanwhile, his plane had arrived in crates by rail from London, and had been transported to the Racecourse, where it was being assembled by four mechanics.  Newspapers noted that the plane’s wingspan was 32 ft 6 in, and that it was 36 feet in length.

For some in days in advance of this significant event, the elephant from Halifax Zoo had been engaged to plod through the streets of Halifax to Highroadwell, carrying placards advertising the projected flights.

Admission to see Grahame-White take off at the Racecourse, or flying over the Zoo, was to be charged at 1 shilling per day, with reserved seats at 2s. 6d; or 5 shillings for three days. Unexpectedly delayed by poor weather conditions, the first flight took place belatedly on the Friday evening, involving a brief expedition over Mount Tabor and the Wheatley valley at low level, lasting just three minutes.  Unfortunately, by that time of day, many potential spectators had already gone home.

The following day, Saturday 11th June, a large crowd was attracted to the racecourse, to watch the aircraft’s successful take off.  That day it was estimated that Grahame-White flew at about three times the height of the Wainhouse Tower.  At the Zoo, a large crowd waved up at the plane.  In all, the flight to and from the Zoo lasted just thirteen minutes, before the plane arrived back at the Racecourse.  Afterwards, the Halifax “Guardian” reported “By his flight to the Zoo and back, the aviator gained a special prize offered by the management, which is an addition to the fees he will receive for his visit to the town.” The bonus was £250.

No flying was permitted on Whit Sunday, but expectations were high for the flights on the next two days.  However, a very strong wind made it too dangerous for Grahame-White to take off on the Monday, and the prospect for the Tuesday was no better.  So, on Monday afternoon, the aircraft was dismantled, its large front-planes being loaded on to a long pole-wagon, normally used for transporting timber. Unfortunately, this vehicle’s frame collapsed whilst being driven through Halifax on its way to the Railway Station – but help was at hand.  A team of “burly Halifax men” hoisted the unfamiliar cargo on to their shoulders, and marched off with it down Horton Street, in time for it to be loaded on to the right train.  The astonishment and delight of the evening’s theatre-going crowds on seeing such a strange procession through the streets was considerable!

Great disappointment was felt by many due to the lack of extra flights, which many had arrived to watch.  And the financial aspect of the first aircraft flight over Halifax proved negative.  For one thing, far too many people had been able to watch the flight without paying an admission fee to the Racecourse or Zoo; but insurance would cover much of the deficit.

At a later date, the Whitley-Thomsons were to be treated to a flight in one of Grahame-White’s planes at Hendon Airfield, near London.

If you would like to hear the story of Halifax Zoo, and early aeronautical exploits in the local area, at 7.30 pm on Saturday 21st April, David will be giving an illustrated talk The Story Halifax Zoo and Amusement Park at Halifax Minster.  Entry free; retiring collection in aid of Halifax Organists’ Association.

Other events at which you can hear David in April:

Saturday 7th April – 10.30 am and again at 11.45 am – Anne Lister Themed Tours of Halifax Minster.   Her own comments on the building, and stories of people she knew who lie buried there.  Duration, about an hour; £5 per head. Book on Eventbrite via Minster website.